Letter from the President

Throughout 2021, the Norman Foster Foundation (NFF) has delighted in resuming many aspects of its pre-pandemic activities, including welcoming students and researchers back to its headquarters in Madrid, while embracing those opportunities for innovation that have come from these challenging times. The past year has seen the launch of virtual Masterclasses and Conversations series which have brought together leading thinkers on the topics of urbanism and archives. At the same time, the five exhibitions throughout Europe to which the NFF contributed and the two workshops held this fall have celebrated the ability to once again safely gather, discuss and exchange ideas.

As a significant marker of its resilience and continued leadership in the field of housing and sustainability, the NFF was recognised in 2021 as a Centre of Excellence by the United Nations Economic Commission for Europe (UNECE). In this role, the NFF will promote the principles of the Geneva United Nations Charter on Sustainable Housing through research initiatives, training and education related to sustainable cities and the organisation of the Second Forum of Mayors in April 2022. This new relationship is the basis for a series of drawings I produced to illustrate the UNECE Regional Action Plan which were displayed at the United Nations’ Palais des Nations in Geneva.

In the spirit of this work with the UNECE, I was honoured to participate in a dialogue with U.S. Special Presidential Envoy for Climate John Kerry and several mayors at the 2021 United Nations Climate Change Conference (COP 26). The event reached an estimated audience of 1.016 billion people, demonstrating the power of bringing together design expertise with political leadership at all levels of government.

The Education and Research Unit organised the Sustainability Workshop 2021 and Re-materializing Housing Workshop 2021, supported through the generosity of the Rolex Institute and Holcim Foundation respectively. These educational programmes brought together twenty students and leading experts from diverse fields to formulate collaborative projects in response to the most pressing issues surrounding the future of the environment and human shelter. The Public Debates accompanying each workshop represented an opportunity to forge a discussion around these topics with a public audience in Madrid and, through online streaming, across the world.

As part of its mission to catalyse intellectual and creative exchange across geographic and disciplinary boundaries, the NFF launched three digital initiatives in 2021: the ‘On Cities’ Masterclass Series, ‘On Archives’ Masterclass Series and ‘Future of Cities’ Conversation Series. My introductory masterclass for ‘On Cities’ is followed by individual presentations by a remarkably diverse cohort of experts, while in ‘Future of Cities’ I facilitate a vibrant set of dialogues regarding topics ranging from urban informality and mobility to economics and food systems.

The exploration of these new virtual formats has been complimented by the development of a number of publications throughout 2021. ‘Norman Foster Sketchbooks Vol I: 1975-1980’ represents the latest contribution to an ongoing series which celebrates the act of drawing as an enduring mode for reflection, invention and communication. In ‘Technology & Architecture: Future of Cities’, more than fifty lectures given at the NFF since 2017 find new meaning and connections in their written form. This editorial approach is also reflected in the ‘Masterclass Series Vol. I: On Cities’ and ‘Conversations Series Vol. I: Future of Cities’ which adapt presentations from digital initiatives into a volume intended for students, researchers and the general public. 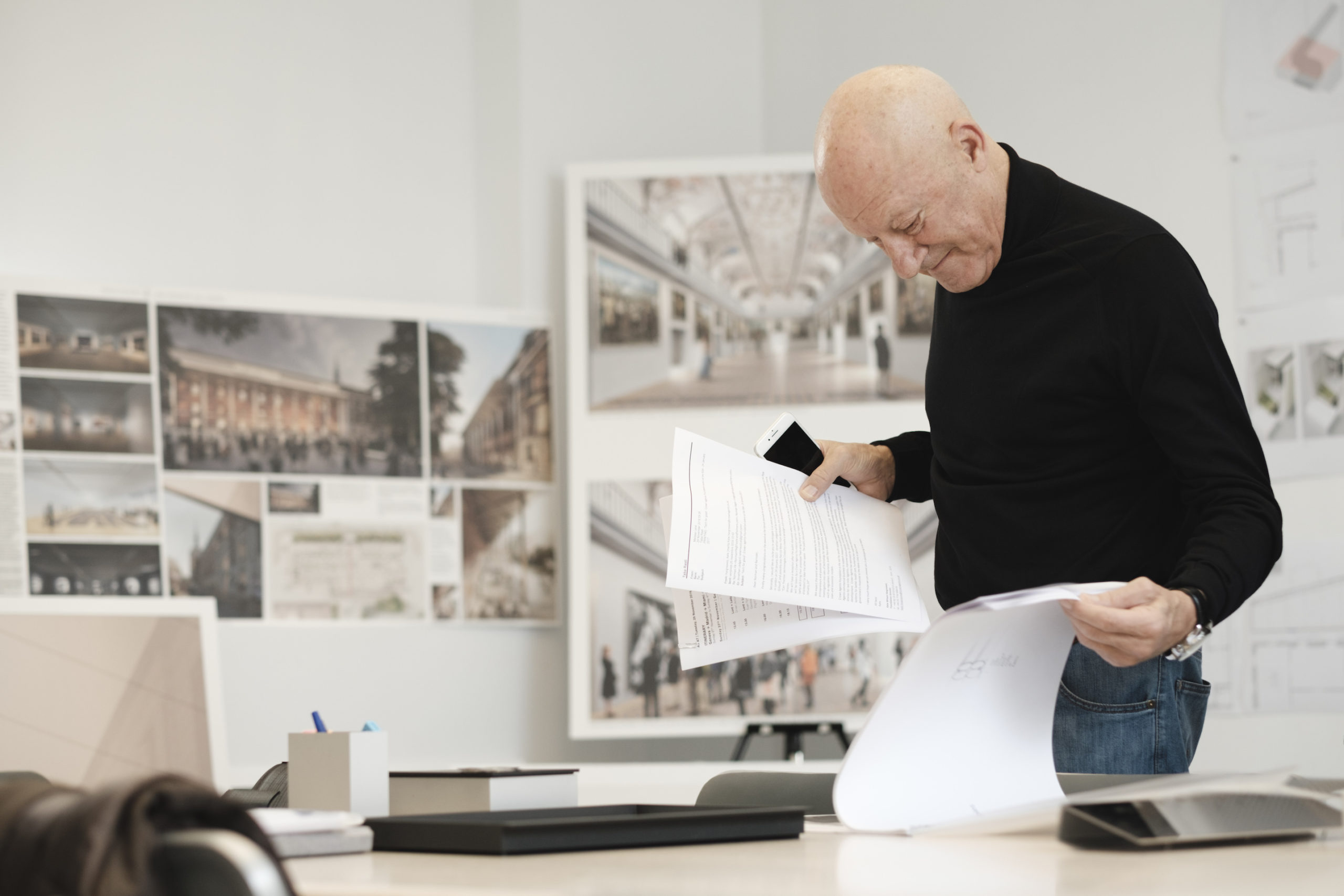 At the heart of the NFF’s diverse activities lies the ongoing efforts of the Archive team to preserve and disseminate a growing collection of architectural records.

This year the Archive incorporated more than 1,000 new drawings and 25 new sketchbooks into its collection while also uploading 500 new items to its online database. The resources available to contextualise and enrich the records within the NFF archive continued to grow through additions to the Oral History Programme. Twenty four individuals were interviewed this year across ‘Inside the Archive’, which centres on collaborators from different eras of my architectural practice, and ‘Building the Future’, which encompasses a wide range of key figures from the fields of art, design, business and politics.

The NFF Archive was honoured this year with membership to the International Confederation of Architectural Museums. This commitment to exchange with other leading institutions dedicated to art and architecture is also reflected in the Archive’s contributions to the exhibitions Shukhov. The Formula of Architecture at the Arsenal Centre of Contemporary Arts in Nizhny Novgorod, Russia as well as Otl Aicher. Metro Bilbao. Arquitectura y Paisaje at the Museo de Bellas Artes de Bilbao in Spain. In the spirit of connecting the collection of the NFF Archive to educational programming, the NFF Archive team led the ‘Through the Archive’ lecture series in collaboration with The Bartlett School of Architecture to share key projects and research methodologies with students in order to provide stimulus for developing their own design projects. 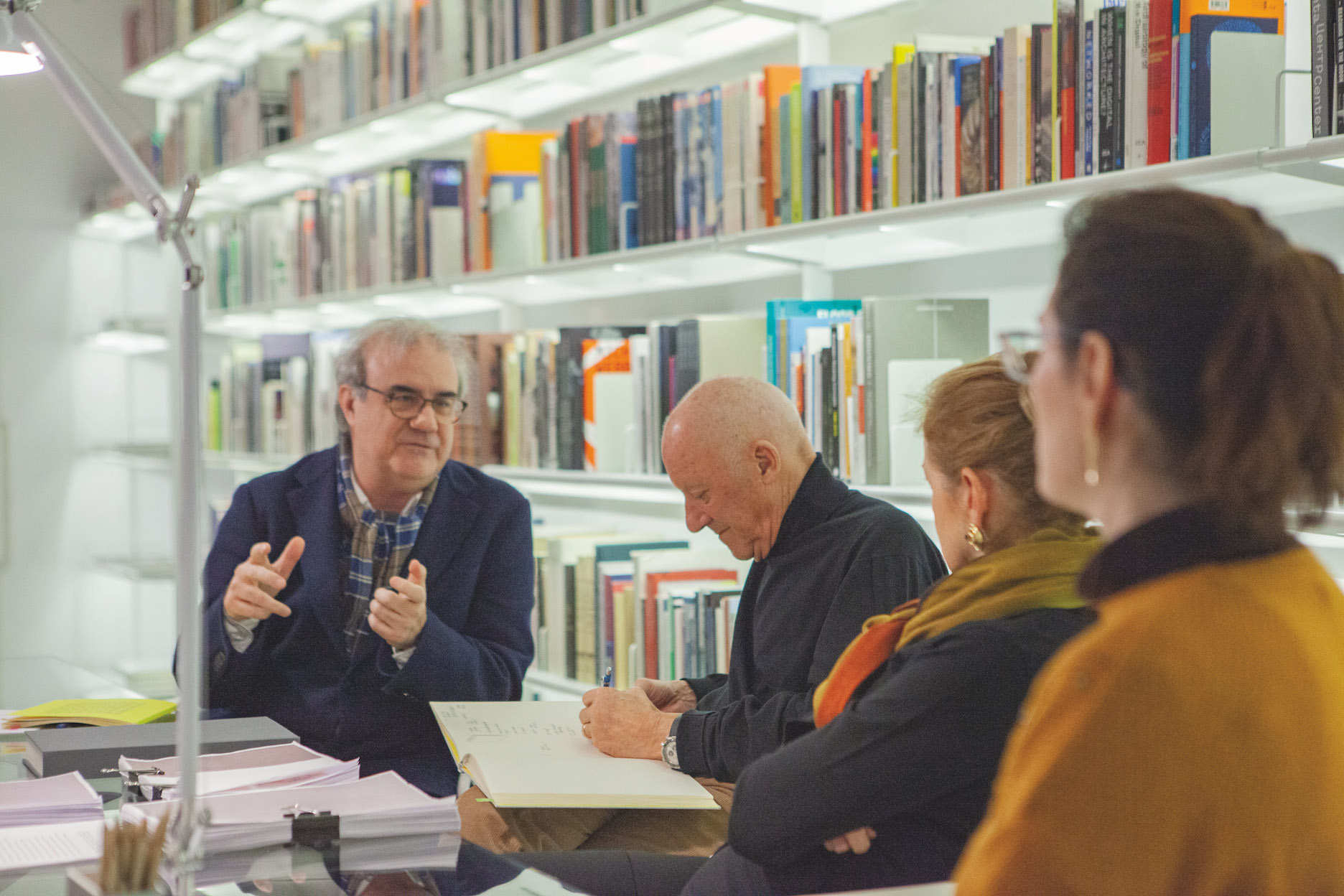 The Architecture, Design and Technology (ADT) Unit has worked tirelessly on all aspects of the MOTION, Autos, Art and Architecture exhibition, a multi-year effort which will come to fruition with its opening at the  Guggenheim Bilbao in April of 2022. In addition to curating an unparalleled selection of automobiles and art, the ADT Unit has worked with professors and students from a number of leading universities across the globe to create a gallery dedicated to visions for the future of mobility. The NFF Team has also designed the accompanying catalogue for the exhibition, to be published by Ivorypress, forming part of a multifaceted examination of the most significant object of the twentieth century.

In 2021, the ADT has neared completion on the Foster Retreat, a private residence which will host collaborators and fellows of the NFF in addition to friends and guests of our family. Design work has also continued on The Grasshopper and Autonomous House for Château La Coste, the latter of which was presented by members of the NFF team at the ‘Design Beyond Technology, Digital Realities’ conference in Barcelona. New projects introduced this year include the conceptual design and physical model of a nuclear battery, produced as part of the NFF’s role as a founding member of the Advanced Nuclear & Production Experts Group (ANPEG). New connections were also forged regarding the design of an ecologically-sensitive campus for an secondary school in Portugal.

In addition to grants provided to twenty scholars to attend Workshops, the NFF’s London chapter has continued to administer multiple forms of educational support. These include its funding of undergraduate students at The Bartlett School of Architecture as well as its annual traveling scholarship, provided in partnership with the Royal Institute of British Architects (RIBA). Additionally, Norman R. Foster Visiting Professorship at Yale University has been honoured to have Tatiana Bilbao and Caroline Bos as esteemed practitioners and educators in the spring and fall of 2021 respectively.

This work would not be possible without the continued support of individuals, companies and institutions, for which the NFF team and trustees are forever grateful.