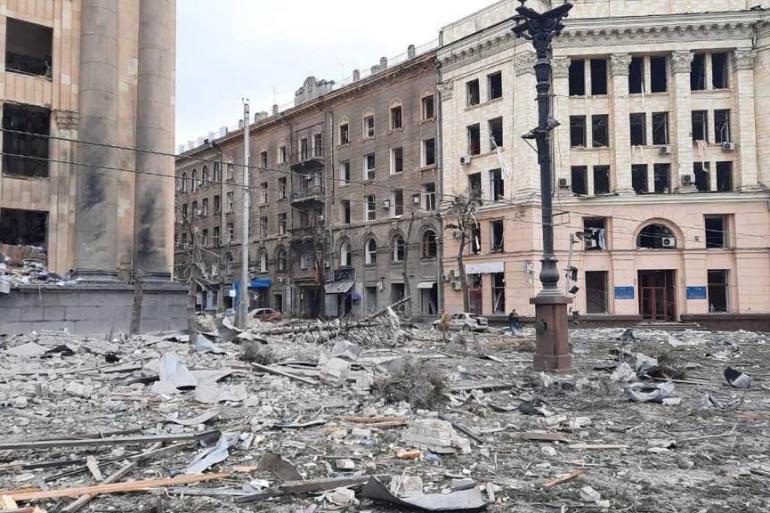 Following discussions which began at the 2nd UN Forum of Mayors in Geneva, Mayor Ihor Terekhov worked with the UNECE Secretariat in Geneva to convene a meeting with Lord Foster which took place at 16:00 EEST on 18th April 2022, to discuss the future rebuilding of the City of Kharkiv.

Mayor Terekhov was joined by Igor Abramovych, People’s Deputy of Ukraine of the 9th Convocation, and Deputy Chairman of the Committee on Finance, Taxation and Customs Policy; and by Olga Demyanenko, Director of the Department for Relations with International Agencies and Financial Institutions.

Lord Foster had invited Professor Ian Goldin of Oxford University and Professor Ed Glaeser of Harvard University; along with the Co-Heads of the Design, Architecture and Technology Unit of the Norman Foster Foundation, Diego Lopez and Alberto Cendoya.

The Mayor set out his vision for the rehabilitation of the city, its buildings and its infrastructure, much of which – including housing, hospitals, schools, cultural institutions and historic buildings – had been completely destroyed. His vision seeks to embrace the city’s recent heritage of investment in technology and healthcare through the creation of, what he described as, new high-tech architecture, as well as the repair and preservation of the buildings and public spaces that form the fabric of the city’s rich cultural history.

In advance of the meeting, Lord Foster had prepared the draft of a manifesto for the reconstruction of Kharkiv (please see below) which he shared with the meeting. He reiterated his commitment to bring together, through The Norman Foster Foundation, a team of world leading experts that could begin the process immediately. The first step in this would be a masterplan which would capture the Mayor’s vision and would provide the framework for the creation of Kharkiv as a city of the future. This masterplan would lead the city scale project which would, through the Foundation, engage the skills of individuals and companies, both Ukrainian and from around the world, to ensure its successful delivery.

END_OF_DOCUMENT_TOKEN_TO_BE_REPLACED
Manage Cookie Consent
To provide the best experiences, we use technologies like cookies to store and/or access device information. Consenting to these technologies will allow us to process data such as browsing behavior or unique IDs on this site. Not consenting or withdrawing consent, may adversely affect certain features and functions.
Manage options Manage services Manage vendors Read more about these purposes
View preferences
{title} {title} {title}